Incendiary exposures, Will and another Kate, Ken Clarke and his secret lingerie revolution and Sam Leith's Legendary cock.

After a brief period of coitus itinerary interruptus, more of

Darling MA's anodyne perceptions on Charles and Di 2 (Camilla), students rioting,why Uncle Ken always knows knickers best and Sam Leith's Legendary cock.
VF: Students. They've been a riotous lot recently and poor Camilla, Pseudo Princess of Wales (don't you dare diss my Diana in Heaven) looked frightfully shocked when those rowdy rabble rousing students who expect a higher education but don't want to pay for it later smashed up the princemobile and poured paint (how common) on it. What should we do about the current taste for anarchy that prevails on these hallowed isles?


MA: Camilla had every reason to look shocked - she was poked in the ribs! I assume a huge priceless ruby near her breast deflected the improvised (and cheap) stiletto away from her heart. I have read about these kinds of miracle in battlefields of valour, a sure sign that God wants to keep her and Diana well apart for as long as possible.
I was most impressed that Charles and Camilla continued to give royal waves even as the yobs pelting their Rolls screamed “Off with their heads!” Should the Duracell Bunny ever seek a retirement warren, we’ll know where first to look for replacement models of robotic endurance.
As for the current state of anarchy (sooo late 80s) in England, the lawful public executions of Nick Clegg and Vince Cable on TV’s University Challenge - after the failed lie detector tests - would probably pacify anyone under the age of 21.
VF  Justice Minister Ken Clarke has taken a lot of flak for retracting 18 years of Tory policy and announcing "prison doesn't work". Do you think poppet has lost his mind or is soft soaping the liberal back benchers who appeared to have taken over the bodies of normally sane Hang 'em and flog 'em Tory boys.
MA: Madame Arcati is privy to Ken’s actual plan - his new complete slogan is:
"Prison doesn’t work. But prisoners will!”
And I can exclusively reveal Ken’s secret weapon of penal correction. Lingerie.
Major retail outlets such as Primark, Bhs and C&A will be invited to sponsor selected prisons and subsidise jailbirds’ keep in return for their lingerie labour - bringing to an end foreign sweatshops and child slaves into the bargain. Ken thinks that exposure to lingerie manufacture all day will either feminise prisoners and soften away their criminal tendencies or cause them to become so averse to prison life that they opt for the straight and narrow as preferred domicile.
How stitching lingerie will affect female and transsexual prisoners I’m not sure. Over to you, Ken.
VF: What of this rift between Cleggover and President Macaroon? What do the stars say about the star-crossed lovers' future?
MA : Alas, there is no rift. Like Antony and Cleo they are embarked on a doomed journey with their own battle of Actium in Parliament Square. If only Clegg had a bosom and a love of the asp.

VF Will and Kate. Seven years and a midsummer wedding? Hope she gets a pre-nup. Is this real love or another royal marriage of inconvenience. And what about that tawdry dress she wore on the day the engagement was announced? Really darling, if you're gonna do wrap, it's DVF.
MA: I’m afraid to say that a Gemini/Capricorn alliance is most unwise - it can only end in sullen silence, separate bathrooms and celibacy.
I happen to know a close friend of Kate’s who told me sometime ago, after the couple’s last break-up, that there was relief in her camp that she was free of him.
Apparently he treated her abysmally. He is, after all, his father’s son and Charles for years was
Private Eye’s “shit of the year” for his treatment of his tarts. Wills may not be as bad, certainly not as promiscuous, but his Uranus Opposition in his early 40s could prompt a longing for soulless extra-marital whoring without condoms in Arundel. Let’s hope I’m wrong.
Kate is uber-trad and will end up more royal than the royal family put together. Doors to manual, darling. The Queen will live to 103.

VF: We live in a surveillance society yet so much goes unnoticed. Police gangsters can kill G20 protesters on camera but no action is taken. Women are dragged out of police station custody cells and beaten to a pulp, on CCTV, and officers are reprimanded, get a slap on the wrist and are completely acquitted by Appeal Court Judges. Can this last. Or do plod have to become more accountable?
MA: Ken’s got the answer - cut police numbers and close cop shops.  He already wants to remove CCTV and speed cameras - the man’s a Hush Puppy anarchist. Thank God for the Tories! Who’d have thunk it. Have you noticed  the more police there are the more trouble? In my area, you can walk 10 miles and not see a cop - and there’s scarcely any crime, except dog defecation. I’m sure that if the police suddenly became visible I’d be mugged in a trice: bad energy attracts bad energy, see.
The recent riots have to a great extent been made worse by the police - provocative kettling, cameramen, batons, mounted charges, barking Alsations, helmets, grouchy facial expressions, etc. Your average cop is a heterosexual thug with a tattoo on his soul: at school he will have been trouble; and it was a matter of chance whether he ended up in a uniform or a prison pen. I’m afraid Hollywood movies and tabloid editors have encouraged this idea that a cop can break the rules and get away with it in the best interests of society.
Without Ken, things will get much worse. 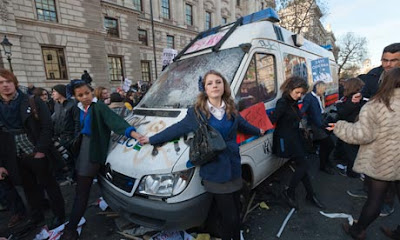 
VF: What of dead tree media? Sam Leith has been heralding it's imminent demise for some time now but newspapers ( the ones that aren't hiding behind massive paywalls) appear to be thriving. What do you think the state of current newspapers / mags are? How long before the digital revolution makes all paper-stuff redundant?
MA: Alas, Sam is correct, print newspapers are not thriving. Just this month most newspaper circulations fell another 4-16%, and the story is downward. For years The Sunday Times sold 1.3m copies a week, now it’s close to 1m and heading south. The pay wall won’t save it. I’m certain iPads (or a better variant) and other portable devices will offer papers and mags an afterlife - and Madame Arcati knows all about the afterlife.
Sam Leith is such a dear and he has told Madame Arcati of his large cock.
I’ve lost count of the number of columns he writes - such is the diversity of opinion in newspaper-land!
Darling MA, thank you for the honour of peering into your proverbial bottom drawer, putting a periscope inside your psychic back channel and allowing your fans to ruminate over your molecules of atomized wisdom.
Happy Winterval poppet. XXX
Posted by Virtual Factory at 07:06 This is who we are

Virtual Factory
The Virtual Factory is a social interlocutor which facilitates access between creative types and those who love art, bypassing the monoliths of mainstream media by causing interference and stirring passion. This is the raw bleeding edge of art. Films. interviews, installations, events, publishing and producing, The Virtual Factory borrows heavily from Andy Warhol's iconic NYC Factory. from The Velvet Underground to Edie Sedgewick, interact and invent, watch the new become the established and contemporary icons brought up from the ashes. Become part of happening. Art is interactive. Dance with me?